As D-Day approaches, is Africa really ready for the AfCFTA?

When Mohammed Ahmed left Sudan in search of better life, he couldn’t have imagined that he would find financial security back home. But, some four years later, he now runs a thriving business, thanks to an innovative scheme involving the UN migration agency (IOM), based on the use of mobile money.

In 2016, facing financial hardship, Mr. Ahmed decided to leave his hometown in Sudan, and travel to Libya in search of a better life. However, as Libya became increasingly drawn into violent conflict, his aspirations turned to Europe, where he hoped to be able to find work and to study.

Like many of his fellow Sudanese, however, these dreams were dashed. Mr. Ahmed was arrested by the Libyan authorities and, along with more than 80 other Sudanese, held in a detention centre in Misrata City, where he was kept for five months.

Migrants in Libyan detention centres face harsh conditions, and can even find themselves under direct attack: in July 2019, at least 53 migrants at the Tajoura detention centre were killed in an airstrike, an act which Michelle Bachelet, the UN High Commissioner for Human Rights, said could constitute a war crime. Following the strikes, the UN refugee agency (UNHCR) and UN migration agency (IOM) described conditions in detention centres as “inhumane”, and called for them to be closed. 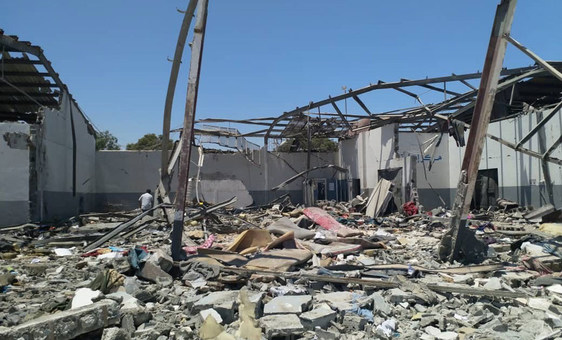 When a member of the Sudanese consulate visited the Misrata camp in 2018, asking the detainees if they wanted to return home, Mr. Ahmed decided to accept the offer. He was the only one to do so and, for him, it has proved to be a life-changing decision: today, with help from IOM, he is the owner of a thriving business in his home country.

“The person from the consulate said that they would contact the IOM, who then made arrangements for me to come home. When I arrived in Sudan, they gave me money for transportation, and we made arrangements to meet in their office in Al Manshiya (a district in Khartoum). Three days later I went to meet them, and we discussed my business plan”.

The assistance that Mr. Ahmed received as part of an initiative, created jointly by the European Union and IOM, to reintegrate Sudan nationals, many of who were stranded in Libya, by helping them to start small businesses.

As Andrew Gray, head of migration management and development at IOM Sudan, explains, one of the problems entrepreneurs face in Sudan is a lack of cash, due to the economic upheaval faced by the country in recent years. Fewer than 10 percent of people in Sudan have bank accounts and those who do face limits on the amount of cash they can withdraw, which makes life difficult for business owners who need to pay suppliers. Mobile money, transferred through phones, is a way around this dilemma.

“With mobile money, funds are transferred through a user’s mobile phone. These funds can then be used to purchase other items or cashed out. The technology is safe and easy to use, and transaction costs are low. Users only need a simple mobile and a mobile phone signal to send and receive SMS messages. There is no need for internet access.

Mobile money is well established in many countries in Africa and is a major payment method, but it is relatively new to Sudan, and we are excited to be doing our bit to raise awareness of this new payment option.”

For Mr. Ahmed, the scheme provided a way for him to open up a general store in Omdurman market, near Khartoum. After he had sourced the products he needed and found the best deals, IOM kickstarted the business by paying for the initial stock with mobile money.

Since then, the business has proved to be sustainable, and his situation is markedly improved: “business is going well”, he says. “I also got married, and life has been getting better”.

* This article was originally published in United Nation’s (Development Business)

Celebrating The Great Achievers Of The Denkyira State 

Development Report@DevelopmentRep
9 Following 1 Followers
Happy Independence Day "It is in our hands to join our strength, taking sustenance from our diversity, honouring o… https://t.co/uc7ePDcGRd
7 months ago
RT @Citi973: EDITORIAL: Bernard Avle's 5-point alternative to Government's E-Levy; 1. Cut the waste 2.Implement Benchmark Policy 3. Tax pr…
7 months ago
114
With non-revenue water contributing to the high cost of water, the Community Water and Sanitation Agency (CWSA) is… https://t.co/5mV0A3u726
7 months ago
Water is Life. The bedrock of everything. Without Life (water) there will be no development - WealthOverLife. Rea… https://t.co/Q64nYEZFV5
12 months ago
The Community Water and Sanitation Agency depends on underground water to serve communities, yet these water source… https://t.co/eMwMxHDrAR
12 months ago
View Comments (0)